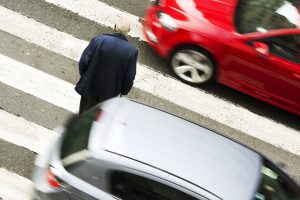 We have previously discussed how Minnesota’s comparative fault laws impact motorcycle accident cases. The same laws apply to matters involving pedestrians. A victim may be entitled to recover damages as long as a jury does not find him or her more than 50% responsible for the accident.* All damages awarded to the plaintiff are reduced in proportion to his or her share of fault, if any. For example, if a jury finds that a victim has suffered $100,000 in damages and was 30% responsible for an accident, then he or she would receive $70,000 ($100,000 minus 30%).

Whether a jury finds a victim partially at fault, as well as what percentage of fault is assigned to each party in a crash, depends upon the circumstances of each case. It would be unusual, for instance, that a victim crossing a street midblock would not be found at least partially responsible for the accident. Even so, he or she can still recover damages if there are additional facts, such as the driver exceeding the speed limit, drinking, or texting. The outcome of any given case is extremely fact-specific. Rochester pedestrian injury victims should contact and retain an experienced pedestrian accident lawyer who will fully investigate their case as soon as possible.

A Rochester pedestrian injury victim’s chance of recovering substantial damages greatly increases when he retains a lawyer who fully investigates and can successfully prosecute the case. As an example of how an investigation and the discovery process can change outcomes: A jury could decide not to award damages to someone who was texting while crossing an intersection, even with a green light, when struck by a car. However, if plaintiff’s counsel can prove that the driver was speeding and, thus, forfeited the right-of-way, a jury would most likely assign a significantly greater portion of blame to the driver.

Our attorneys have recovered more than $125 million on behalf of victims and we are ready to assist you.