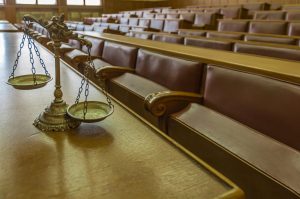 This is the next post in our series on the handling of car accident cases in Rochester, Minnesota. Our last article discussed the determination of liability in commercial vehicle accident cases. It is important to note that multiple parties may be liable in cases involving commercial vehicles. Determining liability can be a very complicated matter, so it is best to speak with an experienced personal injury attorney who is used to identifying the facts necessary to establish liability. In this article we will discuss what victims can expect during the trial process. Contact our office to speak with a lawyer if you or a loved one require assistance.

We have previously discussed the process of attending trial in a wrongful death case. The same principles apply to cases involving car accidents.* The matter begins with selection of a jury. The judge asks initial, basic questions of the potential jurors. Then, the attorneys conduct voir dire, which means asking would-be jurors questions to establish whether or not he/she would be suitable to serve as a juror. The judge may remove potential jurors from the pool if the answers given to these questions show that a candidate cannot be impartial. Each attorney has the right to use what are called peremptory challenges, which allow an attorney to remove a juror without stating a cause. However, it is important to note that potential jurors may not be removed from the jury pool for reasons related to ethnicity, religion, gender, or any other protected characteristic. The jury is empaneled once selection of the jurors is completed.

After the jury is selected and sworn in by the Court, the plaintiff’s attorney makes an opening statement describing his/her client’s version of the facts and what the attorney intends to prove. The defense attorney may then follow with his/her opening statement or reserve an opening statement until the plaintiff rests. After each opening statement, the parties present their cases.  After the defense concludes its case, the plaintiff may conclude with rebuttal testimony, addressing any issues brought up in the defendant’s case. Closing arguments are made, the judge instructs the jury on the law, and the jurors then deliberate. When the jury reaches a verdict, the jury foreman submits the jury’s fact findings regarding liability, comparative fault between the two parties, and plaintiff’s damages. A jury trial can be an extremely complicated process with the rules of evidence strictly enforced. It is crucial that you retain a lawyer who is very familiar with this process.

A car accident case goes to trial when there are disputes over liability and/or damages such that a settlement cannot be reached.

Disputes over liability can take multiple forms, including disagreement over which party is to blame for the accident. An example of this is two drivers each claiming they had the right-of-way after an intersection accident. Another point of disagreement over liability might involve comparative fault. Often in these cases, each side may be somewhat to blame, but each believes that the other bears the majority of responsibility for the accident.

Disputes over damages, on the other hand, may include arguments that the victim has not injured as badly as he or she claims or that his or her injuries were actually caused by something other than the accident.

Obviously, when claims involving liability and damages come before a jury, the facts must be skillfully addressed and presented by the attorney in such a way that a layperson on the jury can both easily understand the case as well as identify with the attorney’s client.